My copy of Fight Club, bought shortly after seeing the film in 1999

“You buy furniture.  You tell yourself, this is the last sofa I will ever need in my life.  Buy the sofa, then for a couple years you’re satisfied that no matter what goes wrong, at least you’ve got your sofa issue handled.  Then the right set of dishes.  Then the perfect bed.  The drapes.  The rug.  Then you’re trapped in your lovely nest, and the things you used to own, now they own you.”

Stuff.  Things.  Junk.  Treasures.  Whatever you want to call it, the older you get the more you accumulate.   Mr. Palahnuk described it perfectly in that the things you used to own, now they own you.

In the book and the film, the narrator makes some interesting choices on how to solve this dilemma.  He decides to (spoiler alert) blow up all his belongings, live in a condemned house, and start an underground boxing club where people beat the piss out of each other with their bare knuckles.  Helluva book and Fincher’s film ranks up there as one of my favorites, but I’m not likely to use them as “how to” manuals.  I’m just happy to either donate or throw away the things I no longer need. But hey, whatever works for you.

And now onto the Minimalist Game …

On Day Two the first thing I parted with was a shitload of wire hangers (approximately 57).  While tempting to count them separately, they had become one metallic blob bulging out of a grocery bag shoved in the corner of my apartment.  Be gone, once useful holders of my Aloha shirts; you will now be recycled to the dry-cleaning company from whence you came.  Since I get my work clothes dry-cleaned every couple of weeks, I must now return all used hangers every time I get new ones.

The second item on Day Two was an Aloha shirt I bought a few weeks after I moved to Hawaii.   After three years the colors of the print had run in the armpits (I’m assuming from being dry-cleaned too often, combined with the Hawaiian heat and my ability to sweat like a banshee), rendering it completely useless.  With all the quality shirt wear options out there in the world (new and used), this one must be thrown away.  And I still have about twenty more of the Aloha variety in my closet.

For Day Three I decided to set free a trio of plastic mugs.

The first was the toughest to give up, a beverage container shaped as a blender from Jimmy Buffett’s restaurant & bar in Honolulu.  My reasons for being reluctant to include it in the game are:

While those are all valid points, the thing has been collecting dust for months on the top of our fridge (somewhat in sight, but definitely not as a proudly displayed trinket).  I received this commemorative item after purchasing the aptly named “Booze in a Blender” cocktail several years back.  Number of times used since?  Exactly once while tailgating for Buffett’s 2013 show at the Waikiki Shell.  If the mug was made of glass I would have kept it, but those pictures of me drinking from it before the concert are good enough.

The other two plastic mugs are also ones I didn’t buy.  The travel one with the handle was from a stay at the Marriott Ko’Olina last Thanksgiving, given as part of the resort fee for unlimited use of coffee and soda.   It came in quite handy when J’Nell and I spiked our drinks while lounging at the pool.  Nice memories, but since the trip I haven’t used it again.

The third was a promo item from a Health Care representative whom I met with sometime last summer.  My company didn’t go with her services, and I never once used the mug.  It seems very durable though, and someone should find use for it (boozy or otherwise).

That makes six items in three days that are gone from my life.  So far no existential crises (although the Buffett Blender was a close call).  But I can see this game getting very challenging as I go along.  Four for Friday, five for Saturday, and then six of my belongings disappear on Sunday.  Insert clever hashtag about how I’m starting to have second thoughts about the Minimalist Game.

Before I sign off for the night, I’ve made the decision to blog every Tuesday, Thursday, and Sunday going forward.  So until then, mahalo for reading! 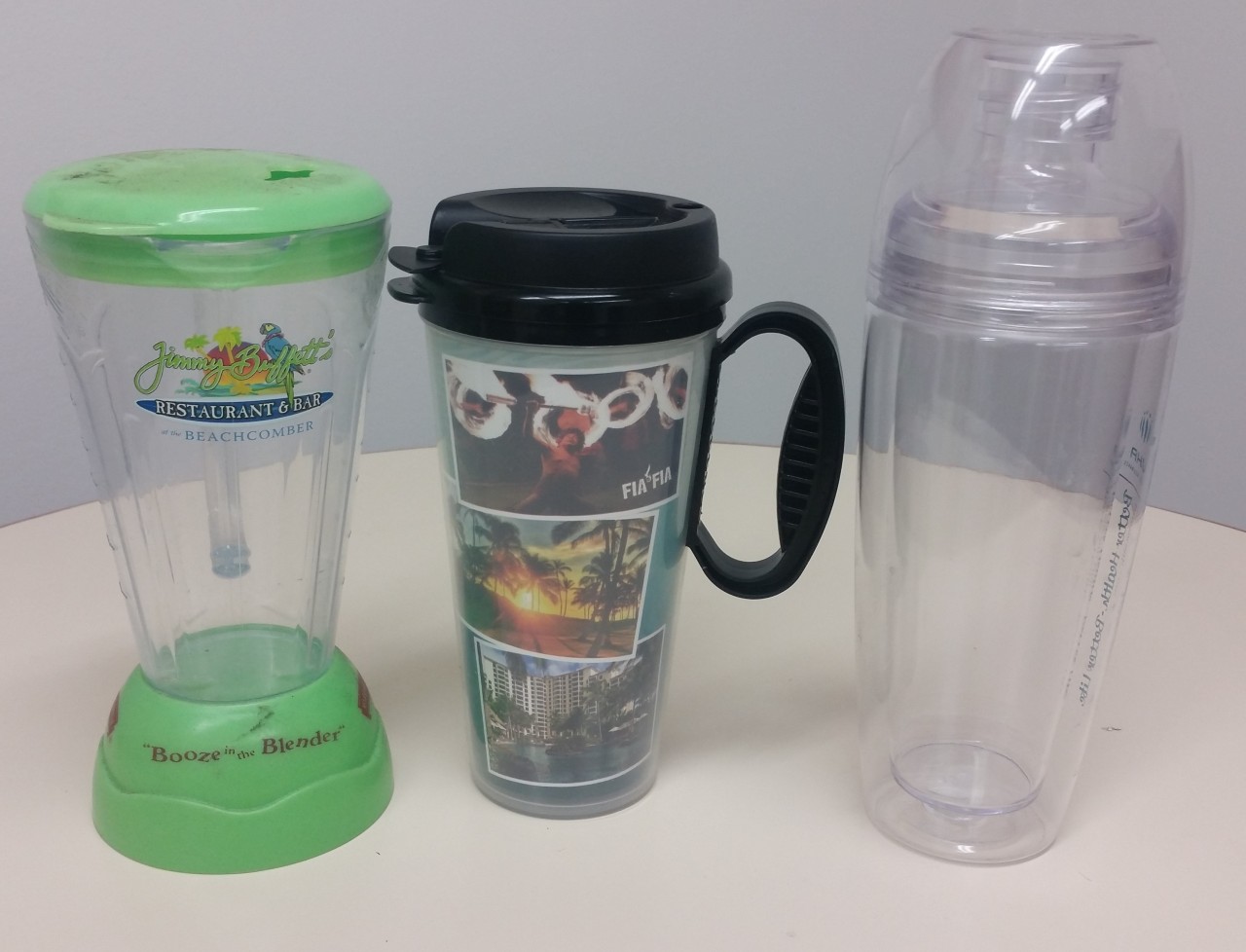 2 thoughts on “The Minimalist Game Days Two & Three: An Ode to Fight Club”