When I think back to 2002, I’m fully aware that year is a good distance in the past.  I’ve certainly put a lot of calendars up on the wall since then.  But it sends a jolt down my spine it was seventeen years ago.

How can it be?

Ferris Bueller said it best, “Life moves pretty fast. If you don’t stop and look around once in a while, you could miss it.”

I’ve made it my mission to always stop and look around, and I’ve done a pretty good job at it.  But regardless of my efforts, time hasn’t given a shit.  The years keep on coming and coming, and I just cannot believe it’s been seventeen of them to the day since the New England Patriots beat the St. Louis Rams for their first ever franchise Super Bowl victory.

Most everyone roots for an underdog, and the “loveable loser makes good” is an enjoyable narrative that is imprinted in our DNA.  Hard to believe for a lot of people, but the Patriots were just that back then.

They had been in existence since 1960 and had been beaten badly in the two Super Bowls they played (1986 & 1997).  Outside of some mini-successes, they’d mostly suffered through dreadful seasons.  The nadir occurred in 1990 when they won one game and lost fifteen.  You couldn’t even watch them on TV when they played at home because the stadium never sold out.

That’s why it was such a joy to see them make that Super Bowl run in 2001-2002.  And outside of Raiders fans (who were still salty over the Snow Bowl loss), it seemed the majority of the country were hoping the Patriots could pull off the upset.  When the team I’ve rooted for since I was a kid went to New Orleans to face the “The Greatest Show on Turf”, they were the sentimental favorite.

What in the hell has happened since then?

While underdogs get major props, conversely, people seem hard-wired to have an aversion to “the consistent winner”.  In today’s insane social media culture of selective information tailored to fit the narrative we want to hear, this has been magnified and fueled into deep hate.  The us vs. them polarization has proliferated like a disease over the years.  Win once, awesome and good for you.  Win twice, meh.  Win three times (or more) and fuck you…you had to have cheated and I want my money back.

The Patriots have won five championships since February 3, 2002.   I was extremely fortunate I got to witness one of them in person four years ago in Arizona.  Malcom Butler’s interception is the greatest moment in sports I ever witnessed. 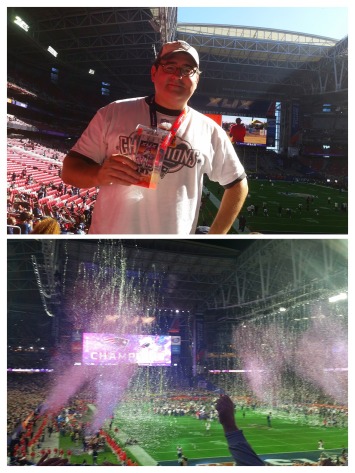 In 2019, outside of Pats fans, just about everyone who knows anything about football hates the team.  In a sense I understand the animosity because of the whole consistent winner thing, but mostly I don’t.  Hate is very strong, and it is the opposite of what the world needs now (just ask Burt Bacharach).  I can hate racism, and injustice, and war, and climate change, and all the truly destructive things in the world, but I could never hate a sports team.

Not even the Yankees.

I stand by that, but I think I’ve digressed a little bit here.

Let’s time travel back to that magical date of February 3, 2002.  I was thirty-one-years-old, living in Los Angeles, and desperately trying to break into the film business.  I had moved out there from Boston in 1998, and success had eluded me.  Pretty much nothing had gone the way I planned after I got my Master’s Degree at Emerson College and relocated to Hollywood.

But the Patriots gave me hope.

Rationally and logically I’ve always known the sports teams I love have no bearing on my actual life.  I can in no way influence whether they win or lose, and the Red Sox, Patriots, Bruins, and Celtics cannot dictate my success or failure.  But when it comes to fandom, rationality will take a back seat to emotions.  Back in early 2002, I thought if the Patriots could win the Super Bowl, I could sell a screenplay and be a successful writer.

I clearly remember the night before the big game.  I was at my apartment alone, drinking two buck chuck from Trader Joe’s and making Gumbo.  Since the Super Bowl was in New Orleans and I wasn’t going to be there, I wanted to somehow connect with the place.  I also bought Dixie Voodoo Beer and Abita (both from Louisiana) to help with the ambiance.

I watched the game at my friends Paul and Andrea’s place in Redondo Beach.  Despite being 14 point underdogs, I really believed they had a chance to win.  As the game progressed and they took a 14-3 lead at halftime, I knew I was witnessing something historic.

But the fourth quarter became a nightmare, and the Rams scored two touchdowns to tie it.  Visions of Bucky Dent, Bill Buckner, and Desmond Howard flashed in my head.  Momentum had shifted and things were looking bleak.  There was only one minute and twenty-one seconds left in the game, and the Patriots had zero timeouts when they got the ball on their own 17 yard line.

John Madden infamously declared the Pats should take a knee and play for overtime.

What happened next was magical.  The young Tom Brady drove the team down the field with huge assists by J.R. Redmond, Troy Brown, Jermaine Wiggins, and the offensive line.  The drive ended with Adam Vinatieri kicking a 48 yard Super Bowl winning field goal as time expired.

In Los Angeles, nearly three thousand miles from both Boston and New Orleans, I jumped up with joy and then hugged my buddy Paul.  I remember kneeling in front of the TV, watching as the red, white, and blue confetti rained down on the Super Dome, and just being awestruck that the Patriots had actually won a Super Bowl.  The same team who lost fifteen games in a season a decade earlier were now champions.

It was the first Boston/New England title since the Celtics beat the Rockets in 1986.

I cried tears of joy for the first time in my life. On the TV they kept replaying Vinatieri’s kick, and it was a true “pinch-me, did that actually happen?” situation. I didn’t want the feeling to end.  While I didn’t sell a screenplay that year or the rest of my time in Los Angeles, just remembering what happened on February 3, 2002 would always make me think it was possible.

It still gives me hope.

And today the Patriots will play the same Rams franchise (now located in Los Angeles) exactly seventeen years to the date of their last Super Bowl match.   It will be two great teams facing each other, and I’ll be rooting for the Pats to prevail.  I’ll also take a deep breath before the game starts, and be extremely grateful for this amazing run the Patriots have been on since the 2001-02 season.

I’ll tip my cap to all the years that have gone by since then, and stop and look around.