For many the Meseta, the middle part of the journey, is the mental stage of the Camino, a time for deep introspection.  For J’Nell and me it’s been the social one.  We were going to have a quiet evening last night in El Fromista after visiting its famous 11th Century Romanesque church, but it ended up being another rollicking dinner with the group who are now a huge part of our Camino Family.

We read you usually bond with those who start with you, but that didn’t happen for a few reasons.  On Day 1, we only had fleeting conversations with our fellow walkers.  And since J’Nell and I are taking our time with additional rest days, most of the people we began with on September 12th (I would say nearly all of them) are far ahead of us.

And maybe you’re meant to meet and connect with the pilgrims you do because of a grander plan (there is the saying “The Camino provides”), or else it’s due to what Hunter S. Thompson referred to as “the whims of the Great Magnet”.  Whatever the reason, I feel lucky to have gotten to know all the amazing people along the way and consider them all part of our Camino Family.  There are pilgrims we saw earlier who we’ve reconnected with, ones you walk with for a period of days and never see again, and the new people who come into your life and stay.

Last night at dinner we were introduced to Michelle from Australia, in her 30s with a great sense of humor, and also to Doug and Nancy, a recently retired couple from Canada with terrific energy and spirit.  We also got to know Lea from Germany better (in her 20s and super nice), as we had eaten together before but really hadn’t talked too much.  Doug and Nancy said they’re thinking of visiting Hawaii next year, and it would be awesome if they did.  It got me thinking how cool it would be to see all the pilgrims we’ve connected with in the future!

It was at dinner last night with the group, during the conversation, laughter, wine, and a mysterious herbal green liqueur, that we learned of San Zoilo Monastery, the place where we’re staying tonight.

Our Camino Accommodations have been quite varied.  J’Nell and I have stayed at shared room albergues, private room hostels (sometimes with our own bathrooms), a few proper hotels when we’ve hit a big town, and even the attic of a church.  Tonight, we sleep in our first monastery.

San Zoilo was founded in the 11th Century and has been classified as a national historic monument of Spain.  It has housed kings, cardinals and bishops.  Today, instead of holy people and royalty strolling around, there are now Camino Pilgrims and tourists as its been turned into a luxury hotel.

At $87 a night, while cheap by any standard in the US and lots of other places, it’s by far the most we’ve spent for a room on the Camino.  We could have got a bed at an albergue for 12 Euro, but when are we going to get another opportunity to spend an evening at an 11th Century Monastery?  To be able to feel centuries of history with its Romanesque and Gothic architecture, contemplative cloister, beautiful church, and museum worthy artifacts throughout the hotel?

Monastery San Zoilo was the perfect place to end today’s walk, which wasn’t as picturesque as the first part of the Meseta.  It began with almost three miles along a concrete path on the side of the highway until we reached Poblacion de Campos, where we had to make the decision to stay on the highway or take the alternative “river route”. An easy one to make, as its almost always best to get away from cars and crowds (there was a group of about 20 people ahead of us wearing green shirts), and to walk on a natural path.

The first two plus miles of the alternate route was a straight shot on a wide dirt road through flat farmland, and after a while you wonder if the river exists.  Two people and a tractor passed us, but otherwise we had it to ourselves.  The path eventually turned narrow (wide enough only for people and bikes), and that’s when we finally got glimpses of the river, which in most parts was barely a trickle or else attracting extra files and bugs.   After three miles or so we reached a bridge where the yellow arrow pointed left, and from there it was maybe twenty-five minutes to Villacazar.

We stopped at the first café we saw there (most everyone does as you never know if there is going to be another), and saw Lindsay, the very cool lady we met from England who has purple hair, who we last saw in Larrasoana on day 3.   We left our bags with the her, and we then went inside the 11th Century Romanesque-Gothic Iglesia Santa Maria la Blanca.  We’ve been fortunate to see so many magnificent churches, and this was yet another.  Set on the hill almost looking like a fortress, it features a rose shaped window, an elaborate and well-preserved doorway, and a Knights Templar tomb.

We chatted and reconnected with Linsday while we had coffee and a light snack.  Wonderful to catch-up with her, but we didn’t stay long as we still had close to 5 miles to Monastery San Zoilo.   The day began walking along a highway, and we would end it the same way until we reached Carrión de los Condes.

After checking in, showering, and then touring the amazing grounds of the place, we had a beer with Russ at the bar and walked back into town (the monastery is about a half mile from the center) to see the famous Singing Nuns of Santa Maria.  I had read they started at 6:30 pm, but when we arrived we didn’t find any nuns or hear any music.  So we walked around the church and then went to a café to meet up with the group.  Doug and Nancy heard there were more singing nuns at another place (Santa Clara Monastery), and they would start at 7:15.  We all finished our drinks and rushed over there.

The nuns of Santa Maria sing folk songs with guitars, but at Santa Clara they were a proper choir in full habit.  While very different from what I had planned to see, it was a powerfully moving experience.  Sitting in the pews and looking at the altar, religious paintings and sculptures, all while the nuns’ ethereal songs filled the church, brought me to another time in history.  When we stood up to leave, the nuns came over and gave us all a Tau Cross, which is associated with the Knights Templar who protected pilgrims back in the day, and St. Francis, who slept in Santa Clara Monastery while he was walking the Camino in 1214.  It was one of my favorite moments of the journey.

Later that evening we had our first dinner in some time without the group as we were very hungry and they weren’t ready to eat.  The meal was outstanding (red peppers stuffed with meat and cheese), and we had a nice stroll back to the monastery.  The moon rose over the river, and as we crossed the bridge I was once again transported back in time.  In my mind’s eye I could see a monk from centuries ago returning from town, taking a moment to stop and gaze at the same moon reflected in the same river. 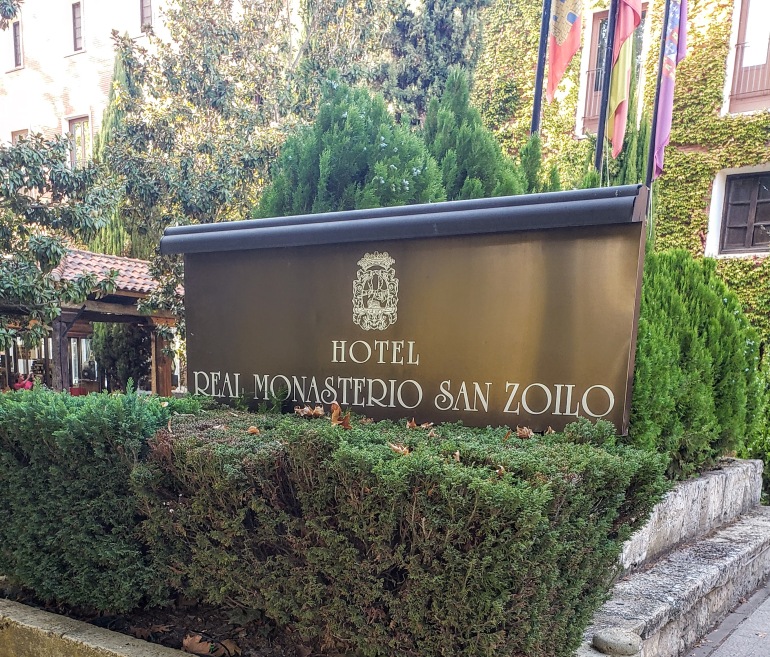 “Strange memories on this nervous night in Las Vegas. Five years later? Six? It seems like a lifetime, or at least a Main Era—the kind of peak that never comes again.”
“Some folks hide, and some folk’s seek, and seeking, when it’s mindless, neurotic, desperate, or pusillanimous can be a form of hiding. But there are folks who want to know and aren’t afraid to look and won’t turn tail should they find it - and if they never do, they’ll have a good time anyway because nothing, neither the terrible truth nor the absence of it, is going to cheat them out of one honest breath of Earth’s sweet gas.”
Hard to believe it’s been 6 months since Lost in the Fog was released. I thank everyone who has purchased a copy, everyone who has read it, and everyone who has sent me a kind note on how much they enjoyed it!! Means so much. And cheers to anyone who will purchase and read it in the future!! 🍻📖🌁
Bienvenidos a Miami.
So grateful to have called Hawaii home for nearly a decade. Will miss all of our friends, the magic of this wonderful place, and the aloha spirit. Mahalo for the memories and I look forward to when we return! 💖🤙🙏
So...this happened! 🥂 🤙😊